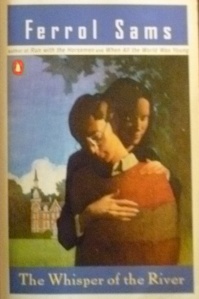 Among the marks of a good novel must be the easy presentation of complexity, a seamless treatment of ambiguity and a deceiving appeal to the reader’s inadequacies, the ones that trail every human being on the remorseless and ineluctable trudge towards inevitable oblivion.

“Steady on!” you will say, “‘The Whisper of the River’ is a merry romp through three years of college, a bumper joke book, if you like, with a serious moral to make us think.”

To the extent that it may recount to the reader the misspent youth he never had, it represents unfulfilled fantasies and curiosities. The social life, the first casual sexual encounters, the early homesickness, the ribald, if somewhat infantile humour, the improbable pranks, the glowing academic achievement, the close brush with terminal discipline, the admiration, sometimes grudging, of tutors.

Hidden beneath is a dilemma. The subject, or is he the object, of these experiences, Porter Osborne, Jr., “Sambo”, is a raw, if resilient, country boy of sixteen, a devout Baptist, short, bespectacled and studious, devoted to his family and to his church. With all that, his father is an anomalous role model. He had gone to the same college his son now attends at his expense, is a hard-working farmer who keeps his fortunes above the poverty-line and is virtuous in many ways, except for unexpressed boredom in marriage and family life as a whole. College has left him, no doubt, with this legacy of discontent. That is another anomaly – the college is a Baptist foundation.

Early on, the novel comes across as superbly executed and amusing, a little flat, perhaps, with a somewhat tedious concentration on bodies and body functions, an obsession that recurs throughout the novel; the author was, after all, a doctor.

Enter Boston, the negro kitchen-hand, and all suddenly comes to life.

“Boston? That’s an unusual name. What’s your last name?”
“Last name’s Jones. What you mean to say is that’s a funny name for a nigger, ain’t it?”
“Certainly not. I was not taught to use that word.”
“Well, don’t get prissy with me. Jest you saying that tells me more’n you think about yo’self. Lessee now. Musta been raised around a heap of us if the subject came up enough for you to have to be taught. Spect yo pa be called Bossman a heap of times. Spect yo maw an maybe yo granmaw high bawn ladies if they go to the trouble to teach you that. None of yo women folks ever held a hoe handle or done nothing more’n a little yard work. Prolly lay down an stretch out a while after dinner ever-day. Uh huh, boy. You quality an you raised right on a cotton farm somers tween here ‘n Atlanta.”
“Boston, how in the world you know all that?”
“Gotta watch, gotta listen in this ole world, boy. Lemme tell you somepin else. My full name’s Boston Harbor Jones, an that is a crazy name for a nigger. Before you laugh, you tell me how come it ain’t funny for a white chile ain’t big as a bar of soap after a week’s washing be named Sambo?”
They laughed simultaneously. Porter felt better than he had since arriving at Willingham.

Such is the introduction of Porter’s new friend, full of gentle irony, accurate, lucid in the vernacular, poetic in conciseness. The reader is riveted.

Strength of style and humour, coupled with an inventive narrative and acute observation amply compensate for the unlikely. The intolerable, hypocritical, albino, blind, early roommate, whom Porter cunningly ousts, sex in a dusty tower, the fat friend, Eunice, “Tiny”, Yeomans of the unhappy home life, who finds romance, the falsely justifiable and improbable pranks, like the the thick scattering of toilet paper over the campus in readiness for a VIP visit and so many other encounters and adventures.

Porter himself is not to be so readily dismissed. He has an independent turn of spirit that often rebels. At the start he is prevailed upon to join his father’s fraternity, but is never comfortable. He and Tiny, after an initial clash, had found mutual help in their studies and became firm friends. To his eternal credit, after calling upon his father to rescue her from financial straits in the third year, he then, when it comes to a squalid issue with the fraternity, who briefly want to exclude her from a dance, loosed his ties in support of his friend.

On the arrival of a new lecturer in the third year, Philosophy becomes Porter’s fresh and abiding interest in the hands of his gifted tutor, Dr Robert Rudh, who systematically deconstructs the Christian faith and reinstates it. In his third year also, Porter witnesses the discrediting of a self-righteous, religious bigot, who seeks the dismissal of leading lecturers on religious grounds.

Porter’s time at college coincides with the outbreak of WW2 and he adopts a detached, if thoughtful, attitude. Then comes the Japanese attack on Pearl Harbour, the grief, the effect on plans and the postponement of aspiration as duty calls.

You discover life is not such a trudge, that oblivion is not so certain and that College is more than just a fun time: it is when the quiet, insistent voice of life’s river may first be discerned.

8 thoughts on “The Whisper of the River: Ferrol Sams”